1. GOD: Going the opposite direction 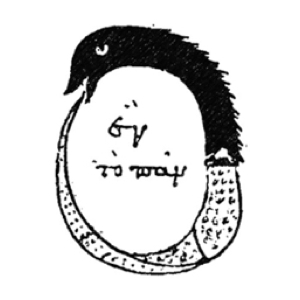 Once upon a time there are was a …

Just a very usual God that had everything and was everywhere, but there was also Nature of things that was everywhere as well. One morning while in a good mood God glanced in the mirror that he always had close to himself. He used that mirror to help keep himself in a good shape. Having everything and being everywhere, as you may think, is not an easy life. The mirror was the only thing that made God confident each time he looked at the reflection. This morning the reflection in the mirror was pretty much the same as always but there was one thing that was bothering him and that was the Nature of things that was everywhere. Obviously, there was not enough space for both of them and that thought made this morning not as shiny as it could be. Then, God glanced into the mirror once again and said: “I am everything and everything else is whatever” and … immediately he turned into Monkey.

As soon as that happened, Monkey found in front of him an invisible glass with some one on the opposite side. That someone was very funny and Monkey showed him his tongue. The reflection did the same and Monkey realized that someone was copying someone else. Monkey did not know what is reflection is was and he did not remember what had happened just a moment ago, but at that particular moment Monkey got a clear idea that there is a he namely Monkey and there is also Something Else. He no longer realized that there was a mirror just in front of him and that it reflected everything and it showed him his real face that had actually not changed. However, at that time Monkey also saw that everything he did made a difference and everything else that was around him changed because of what he was doing. He also got the clear idea that he could understand everything around him just by copying it. Monkey had to learn many new things. Copying, repeating, and by actually completely messing up the Nature of things, he somehow understood something, but to be more precise, he did not actually understand, he simply copied and learned everything by heart. Then, something that is impossible to explain with words happened. That happened somewhere very deep. Something big suddenly struck Monkey from the inside and it was so strong that he suddenly desired to jump, bite, and to do many other things that he was not able to explain yet. His desire was so strong and his urge to jump and bite was so devastating that Monkey turned into a Lion.

Lion was handsome, playful, brave, and very honest. He did not want to learn and repeat anything anymore. He did not want to understand anything.  His brave heart wanted to jump, bite, fight, and win, and that was exactly what he did. Soon, he became stronger and faster and in combination with his noble heart Lion had no one to compete with. He found a few others like him but they all preferred to stay far away and keep their distance and to be in their own places the strongest, fastest, and noblest. Lion already did not recognize his reflection in the mirror that still was very close to him. He did not remember what he was before he become a Lion. He just wanted to fight, bite, and get stronger and faster. That was exactly what he did until he got tired. That change was not dramatic yet and did not become obvious right  away, so Lion  noticed this change only after years of his attempts to ignore it. He suspected that his changes happened because of the Nature of things but he did not understand it anymore. The only thing he knew about Nature of things is that it is everywhere and there is nothing you can do about it. He wanted to learn more about it to understand what was going on, but actually he still did not want to understand anything. He only wanted to fight, bite, and win. Then, pressed by these two so opposite forces, tired Lion turned into an Alligator.

Alligator had big eyes that perfectly reflected the Lion’s life, his noble heart and his extreme urge to win. Alligator was not able to jump like a Lion anymore but he did know how to bite and did it well. His biting skills became even better with time, so he would not need to change his position for hours while he was thinking about his own things and waiting for some prey to come close. Then, one fast bite always sealed the deal! Now he found that there are many others around him. He noticed the jumping and running lions, the wolves, rabbits and other furry mammals. Some were slow and easy to catch, other extremely fast. He also noticed reptiles: snakes, lizards, other alligators like himself, and many other that were not close by. Monkeys where not even around. Some of monkeys were actually screaming at other animals from the trees but no one took them seriously. These were the new rules and a new life. Although Alligator was not able yet to do better than other slow but tricky reptiles he enjoyed biting foolish jumping rabbits, wolves, and sometimes even young inexperienced lions. He completely forgot that he was someone else once and he did not know what to do next. His life became slow and boring. Years went by and still he had very little idea about what to do with everything that he had learned by heart as a Monkey and gnawed with his sharp teeth as a Lion. He felt that it must be something really big, but to his regret he simply used what he learned so far to help others. Why would he do that? He did this simply because others gave him something to bite in exchange for his help. That’s it. He would work in that “zoo” as an Alligator for his entire life like many others. That is definitely what would happen. That is the usual way and he would follow that way, if Alligator had not had a dream. He actually had the biggest dream of his whole life! Alligator dreamed of flying and his desire to fly was so strong and his actual life was so boring that soon Alligator turned into a Moth.

Moth was graceful and almost unreal. He could no longer jump and he also did not know how to bite. There was nothing that could be done with him anymore. One gentle touch could destroy moth in a moment. The only thing he was able to do was to fly, but that was his real dream! Finally, his dream became his life, but there was one more thing that actually now made him different, he was able to attract attention. Particularly, when he was very close to the big shiny lamp, he would attract the most attention and it was something that he liked a lot. In his new life he did just the same things that he had learned by heart as a Monkey, gnawed by teeth as a Lion and sharpened by fast bites as an Alligator and he did not know what to do next. It was just like many times before. He simply attracted attention and this was the only thing he did well. Now he found himself among many other insects. What was before just a buzzing noise now became thousands and thousands creatures just like him. There were many others as well, but now it was no fun to be among any of them anymore. Rabbits, wolves, lions were simply foolish. Lizards, snakes, and alligators were tricky and insatiable, and he had no reason to even think about monkeys. He did not know yet that the life of Moth is short, but he found that his new life became very fast and easy like it was never been. Many other things happened after this but not as many as before. His memory was not as good as it had been and he was able to catch just a few sharp moments before Something happened.

There was a Spider who was trying to convince everyone that everything around them is “The Society” and all moths must sit in a spider web and return to “The Society” everything that they had learned by heart as monkeys, gnawed by teeth as lions and sharpened by fast moves as alligators. Of course, spider also attracted attention but he did it in his very different way.

There were other moths, dragonflies, and many other creatures who did not present themselves but with whom it was very easy to fly. It was nice to have all of them so close, and altogether they looked like “The society” that spider was talking about. It was an easy and fast life and everyone touched each other with the little movements of air produced by their small tiny wings.

There was also a feeling that during all that time God remained God and he had everything like at the beginning, and that he had divided at the very beginning on Everything and Everything Else just to get bigger because how else could He who has Everything grow any other way? There was feeling that somewhere, very close to him, there was a mirror that still could show him who he is and what is Everything Else.

There was also a big dazzling bright lamp that proved better than anything else that Moth was still Moth.

There was also a new decision, there were results and happiness, and even desire to

There was an Interest and in fact interest was always there.

It just did not always seem so. Interest in everything!

Because, even if you already learned everything…

There is Something Else.