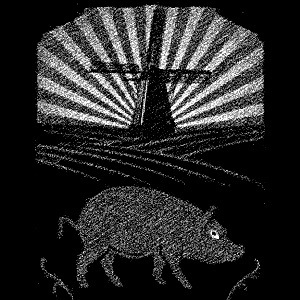 Here is my story.

I am not good at writing but I like such stories, they make me think and I try to write that down too. Just my 5 cents!

Near a small village there was an animal farm. Yes, just like that, a very small farm with funny animals. One year something did not work as well in the skies as it had before and master did not get as many plants as he expected. You know these guys with their little farms, they always believe in coincidence and they are always thinking that the things will go just the same as they always did. That year, however, it was different and coincidence was different, so he got no food to feed his animals, his wife, and himself. Animals had been with master for a long time and they had been paying him back as much as they could, with eggs, milk, wool and sometimes even with their meat. He loved all of them and especially his dog Bob. That year the balance between the things outside of that little farm and inside told the master there was a need to get more meat since now he had not enough food even for himself. Some animals had to go, poor things!

You know what happened next? Well, that is the best part of the story. All the animals decided to have a meeting and decide what to do. That night almost all of them decided to leave the farm before master could kill them one by one. Strong and big cows and uncomprehending pigs said: “We will leave this farm to find a better place where we can stay safe. Finaly by a wolf or knife does not make a big difference, but in this world there are many masters with better luck.” Chickens that still were able to produce eggs but already completely lost their gender identity said: “We have our purpose! Our eggs make us valuable anywhere. We will drop as many eggs as a master’s “Thunderjet F84” during Korean War and no one else can survive better than we outside our farm.” Several other animals also proposed a few exiting reasons but they all decided to leave their little farm.

All except the dog. Bob was silent during the whole time, and finally animals asked him: “Bob, what about you, are you going with us?” Bob said: “Sorry guys, I will stay. I have some perspectives here”.

The animals were surprised and intrigued: “Bob, what kind of perspectives do you have here next year? If we all leave you will have none one to care about and even if your master left his Korean chick  50 years back he still remembers how she prepared him rague out of dog for their last dinner.” “Yes”, said cow, “Sometimes he calls me by her name…”

“I know that story”, interrupted her Bob. “Guys, I heard a discussion between our master and his wife last night when they forgot to kick me out of the house and I definitely know that I have perspective here. You go guys and do not worry about me”.

Animals: “What perspectives you are talking about Bob?

Bob: “Master said: “If during the next year we have the same luck we will both  be sucking off our Bob.”

“I will stay guys”, finalized Bob.